Creator and Boss Lady of Hoops, Thighs & Buttocks, Jane Fondle is all about getting physical. Starting out as a star in her parent’s lounge room, she then took it to the streets at age 7, surprising her neighbours by busking at their doorstep, singing and dancing “We built this city on rock and roll”. As a teenager Fondle finally found an outlet for dancing on stage in a fabulous costume and became a National Aerobics champion. She then moved on to become the world Twister champion (true story!).

After studying all styles of dance and movement, Fondle discovered her love for the hula hoop at a circus festival in 2003 and hasn’t looked back. She’s developed her own hula hooping style, incorporating 80s/90s dance, aerobics and comedy. She now travels the world, training, teaching and performing at international hula hoop retreats. Flexi Lexi is all about the booty popping, hip-hop dropping dancing fun! She’s a maniac on the floor and has trained in all styles of dance, so we like to think of her as a quadriple threat.

Teaching and performing for the past 10 years, we’re lucky to have this babe in our Melbourne teaching squad to bring the booty dance, 90’s hip-hop and 80’s dance fun to our hens parties and corporate workshops alike.

She’s sure to make you smile, laugh and giggle while learning all the sickest dance moves! It really is an experience being in Flexi Lexi’s dance class. 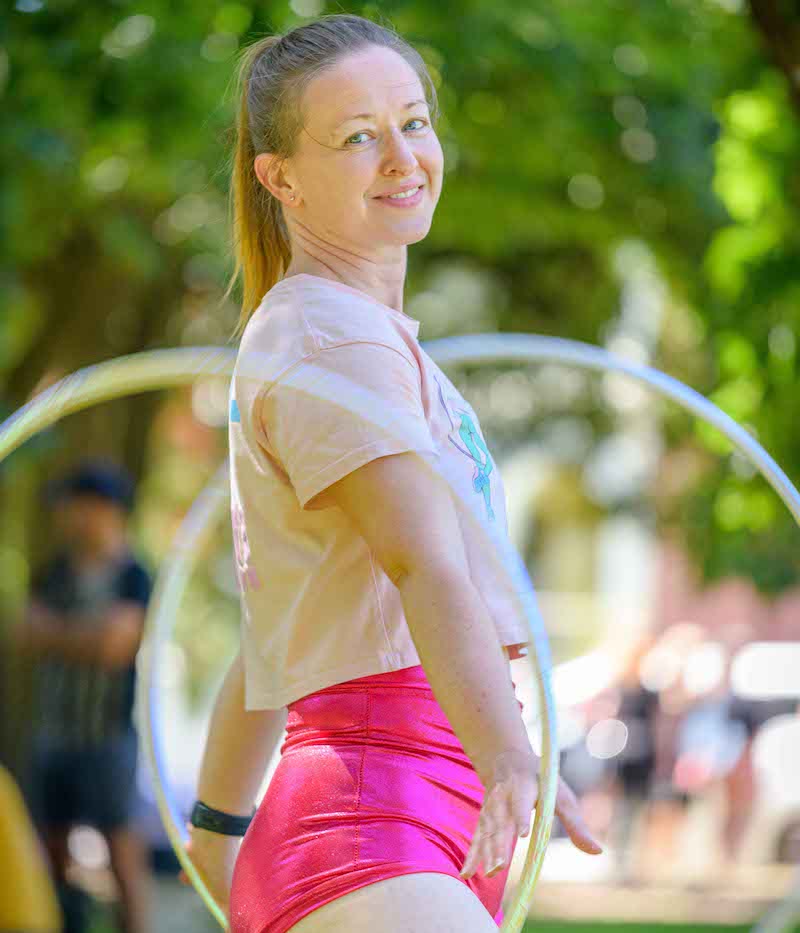 A life-long fan of moving and dancing, Sooz spent 17 years training and performing Irish dance, jigging her way to 6x Australian Champion. She went on to teach all the Erins and Sineads their reels and hornpipes for close to a decade.

After quitting the curly wig, fake tan and poodle sock world, Sooz found herself looking for a fun way to still get her kicks. When she came across hula hooping, she didn’t own a pair of hotpants, but was intrigued by exercise that used body parts other than legs! Soon Sooz was getting hoopy every day. Armed with a growing arsenal of sparkly hotpants and hula hoops, the scientist-by-day grew into her hooper-by-night alter ego, Soozyloops.

With a love for all things hoop, Sooz is excited to be a part of the Hoops, Thighs & Buttocks crew and to inspire others to find their own loopy alter ego!

Abrakasamuel (or Sam for those who can’t get their tongue around that) has always had a passion for movement and the absurd, attracting them to the diverse realms of the performing arts. After completing a Bachelor of Performance, they quickly immersed themselves in fire performance and circus arts. This led to them becoming a teacher at Roundabout Circus in NSW where Sam further built their skills in the circus arts and assisted people from all walks of life in achieving their circus goals.

Fresh to Melbourne, we’re stoked to have Sam join our teacher team. As a master of the Hula Hoop, Sam has so many tricks up their magic sleeves, you will be blown away by their skills and want to learn more more more! Not only are they are sought after teacher for hula hoop pros, Sam is able to teach those who are totally new to the hoop and help them to become a huperstar too. Their teaching style is fun, accessible and full of sassy humour. You’ll leave the class with belly aches from both laughter and all that hoop spinning werq!